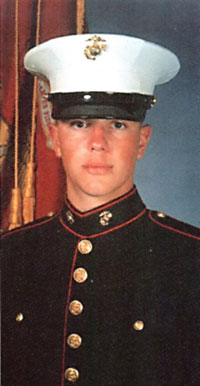 From the family of LCpl Daniel R. Olsen

Daniel Robert Olsen was born on March 15th, 1987 in Eden Prairie, MN. He was the son of Wayne and Gwen Olsen, and the brother of Shelcy and Shaina. He grew up in the typical way, playing with legos, building forts, and teasing his sisters. He was particularly good with computers, and memorizing anything with numbers. (He impressed his superiors by memorizing everyone’s machine gun serial numbers.) He sampled activities such as swimming, skiing, skating, soccer, karate, golfing, scouts, and band. He liked to be a part of things, and helped others whenever asked, but he always avoided the limelight. He had a few life-long friends whose activities changed as they grew. A favorite was simply staying up all night, playing video games, and eating pizza. Perhaps, revealed by some tight lipped smirks, there was a tendency for some mischief, too.

During high school, Daniel was part of the drum line, worked at Camp Snoopy in the Mall of America, and volunteered in the children’s program at church. It was also around this time that he began to consider the military.

In March of 2005, Daniel graduated from high school, turned 18, and enlisted in the U.S. Marines. In September of that year he left for boot camp, and graduated in December. He spent two months in infantry training, and was attached to a company at the 29 Palms Marine base in California where he continued training until deployment. The challenge and brotherhood of the Marines suited him well. On January 29th, 2007 he left for his first tour of Iraq.