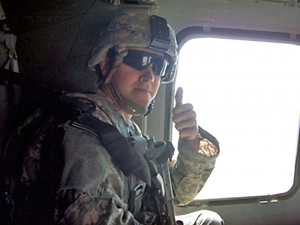 Chad was born on March 15, 1990 in West Allis WI and grew up in Franklin WI until he was 15 when his parents were transferred to Georgia. He was the only child of Brian and Shanon Coleman.

From the time he was old enough to realize what a soldier was he knew that was what he wanted to be. All his toys including guns, soldiers, tanks, jeeps GI Joe’s and camouflage clothing revolved around the Armed Forces. He knew every war movie ever made and could quote the lines before the actors could say them. He never met a veteran or an enlisted man that he didn’t love, he actually become a veteran himself. He was able to finish his studies thanks to the online university for military. He wanted to hear all their war stories and he had the unique ability to bring himself to whatever age level he was with. At a very young age his grandpa took him to a gun safety course and the firing range so that when he was old enough he could go “up north” hunting with his Pops and grandpa. He loved the hunting camp where he could play cards all night and hunt all day. Fishing was his second love and he spent many hours on the small lakes and on his grandpa’s charter boat.

Chad was not your usual teenager, his hair was always kept short, his pants were never falling down and his favorite outfit was Wrangler Jeans (with a belt), flannel shirt, hunting boots and baseball cap. He always stayed true to himself and only hung with kids that loved what he loved.

Chad was not perfect by any means, he had a temper and was a little spoiled but he had a goal and that was to be a soldier. He never wavered from that goal even though the family did not want him to go into the military there was no stopping him. He enlisted in the Army as a Cavalry Scout in October of 2008. He went to Boot Camp at Fort Knox Kentucky and graduated in March of 2009. All his correspondence was upbeat, he loved every challenge they gave him and of course he was the designated marksman for his outfit. He left for advance training in Fort Campbell immediately after Boot Camp. He knew when he signed up that he was going to Afghanistan but that didn’t stop him!

In January of 2010 he left for Afghanistan. He kept in touch with everyone by e-mail and Facebook almost daily except when he was out on a mission. He grew more serious as the months went by but he was already talking about re-enlisting. And then the family’s worst nightmare came true, the phone call that said Chad was killed in action on August 27, 2010. He was awarded the Bronze Star, the Purple Heart and many awards and commendations to numerous to mention. He made his final trip back to his beloved Wisconsin aboard a small jet accompanied by a Chief Petty Officer from the Navy. He was an old neighbor of Chad’s and when he learned of Chad’s death he requested permission from the Navy to bring him home to his family. He said it was the defining moment of his 22 years in the Navy.

His parents had lost their only child and the family had lost their hero. Broken hearts will never mend, tears will always come easily and memories will always stay bright. We will take some comfort from remembering he was the best soldier there ever was and he died doing exactly what he wanted to do. He achieved his goal in just 20 short years, some of us never achieve our goals in our lifetime. He was who he was born to be…An American Soldier.

Our “Soldier Boy” flies with the angels now and will forever be “Our Hero”.