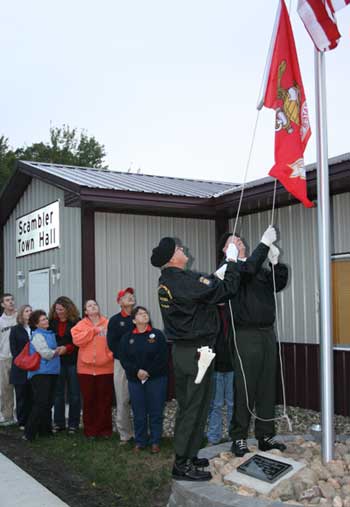 By Kelley Gorman
Sgt. Bryan Opskar always wanted to be a Marine from the time he could barely big enough to get the words out, family attested last Thursday at a dedication ceremony held at the Scambler Township town hall off of State Highway 34 north of Pelican Rapids. His dream to be a part of an elite fighting force came true when he joined the Corps at the age of 25 in 1998. Opskar was killed seven years later when his military vehicle was struck by an improvised explosive device while conducting combat operations near Ar Rutbah, Iraq, as a part of Operation Iraqi Freedom.

“The Al Anwar Province was pretty bad back then,” explained Bryan’s father, Erling Opskar. “He was on a reconnaissance night maneuver when a IED strapped to a light pole exploded. He was hit with shrapnel between his flak jacket and helmet. He was the only one on his vehicle killed.”

Bryan was a little older than most Marines serving with his unit and he held the rank of sergeant. His dad described him as a leader and a heck of a Marine.

“He enjoyed the Marines very much,” Erling noted. “In war, he was tense at times, but everyone got along with him. He could talk to anyone. He was easy to talk with and work with and he just enjoyed living.”

Thursday, October 9, a flagpole installed in his memory was dedicated. His parents, Erling and Betty, stood alongside other relatives and friends and embraced their daughter-in-law, Leandra. Bryan was married just seven months prior to his death which occurred in 2005. At the dedication Leandra shared, “Bryan believed in what he did. Thank you for keeping him and our family in your thoughts and prayers.” She also said, “Under this great nation, some of the best did serve and die.”

The local VFW and American Legion Color Guard performed a 21-gun salute and then raised Old Glory along with the bright red standard of the USMC. A man named David Larson has spent the last several years donating the materials and time to erect flagpoles where families of fallen armed forces members wish to have them placed. Erling said that the Blue Star Parents (parents of active soldiers) contacted the Opskars, who are now Gold Star Parents (parents of fallen soldiers), about the work of Larson. They wanted to have it placed somewhere close to where they live on Pelican Lake and where it could be used by more people than just themselves.

Erling said his dad bought land on the lake in 1959 and they have been frequent visitors to the area ever since. He and Betty built a house on the property in 1986 to replace the cabin built there in 1967 and have lived there year round for the last three years. Bryan is a 1991 graduate of Princeton High School, Princeton, Minnesota, and spent many summers sailing, racing and fishing. He said that local grad Jason Osterby was a close friend of Bryan’s from the lake. Bryan also enjoyed hunting ducks and deer in this area. The 20-foot flagpole was installed the same day the Josh Hanson Memorial Shelter in Maplewood State Park was dedicated. Erling and Betty attended that dedication and said the memorial for their own son turned out very nice as well. Not by design, but interesting to note, is the fact that Bryan’s flagpole was the 24th erected and Bryan was the 24th soldier from Minnesota killed in the Iraq war. Lights were also placed around the new flagpole so that the flags could be kept flying at all times.

Bryan was a member of the 2nd Light Armored Reconnaissance Battalion, 2nd Marine Division, II Marine Expeditionary Force out of Camp Lejeune, North Carolina. Beside his parents and wife, he also has a surviving younger brother, Chris, and sister-in-law, Rebecca.